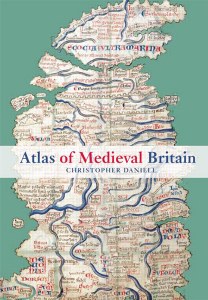 Christopher Daniell's Atlas of Medieval Britain presents a sweeping visual survey of Britain from the Roman occupation to 1485. Annotated throughout with clear commentary, this volume tells the story of the British Isles, and makes visually accessible the varied and often complex world of the Middle Ages. The Atlas depicts the spatial distribution of key events and buildings between 1066 and 1485, as well as providing the relevant Anglo-Saxon background.

Charting the main political, administrative and religious features of medieval society, the maps also locate cultural landmarks such as the sites of mystery plays, universities and specific architectural styles. Topics covered include: Iron Age and Roman occupation Anglo-Saxons and Vikings changing political scenarios within England, Scotland, Wales and Ireland religious framework, including diocesan boundaries, monasteries and friaries government, society and economy. Complete with recommended further reading, this volume is an indispensable reference resource for all students of medieval British history.

The Genius of the Anglo-Saxons

The Making Of The British Landscape : How We Have Transformed the Land from Prehistory to Today