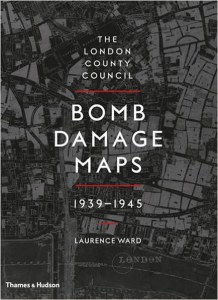 The attack on London between 1939 and 1945 is one of the most significant events in the citys modern history, the impact of which can still be seen in its urban and social landscapes. As a key record of the attack, the London County Council Bomb Damage Maps represent destruction on a huge scale, recording buildings and streets reduced to smoke and rubble. The full set of maps is made up of 110 hand-coloured 1:2500.

Ordnance Survey base sheets originally published in 1916 but updated by the LCC to 1940. Because they use the 1916 map, they give us a glimpse of a lost London, before post-war redevelopment schemes began to shape the modern city. The colouring applied to the maps records a scale of damage to Londons built environment during the war the most detailed and complete survey of destruction caused by the aerial bombardment.

A clear and fascinating introduction by expert Laurence Ward sets the maps in the full historical context of the events that gave rise to them, supported by archival photographs and tables of often grim statistics.