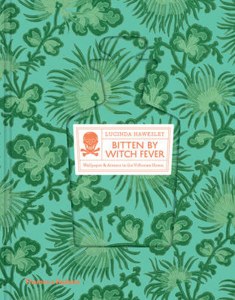 Bitten By Witchfever: Wallpaper And Arsenic In The Victorian Home

Bitten By Witchfever : Wallpaper And Arsenic in the Victorian Home

In the 1880's, largely due to a growing number of cases of unexplained infant deaths, the evidence that arsenic in printed wallpaper was poisonous was growing. Bitten By Witch Fever (William Morris's own phrase to dismiss arsenic and wallpaper related public health concerns in 1885) tells this fatal story of Victorian home decor, building upon new research conducted especially for this book by The National Archives, on their own samples. Spliced between the sections of text are stunning facsimiles of the wallpapers themselves.

"In Germany, in 1814, Wilhelm Sattler created an extremely toxic arsenic and verdigris compound pigment, Schweinfurt green known also as Paris, Vienna, or emerald green which became an instant favorite amongst designers and manufacturers the world over, thanks to its versatility in creating enduring yellows, vivid greens, and brilliant blues. Most insidiously, the arsenic-laced pigment made its way into intricately patterned, brightly colored wallpapers and from there, as they became increasingly in vogue, into the Victorian home. As its use became widespread, commercial arsenic mines increased production to meet the near-insatiable demand. Not least of which was the UK s largest mining plant, DGC whose owner was William Morris, originator of the British Arts and Crafts movement and arguably the finest wallpaper designer of his generation.

High Minds: The Victorians And The Birth Of Modern Britain