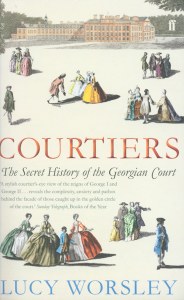 Courtiers : The Secret History of the Georgian Court

From Lucy Worsley, Chief Curator of the Historic Royal Palaces, a hugely engaging book about the men and women who lived and worked at Kensington Palace.

Ambitious and talented people flocked to court in search of power and prestige, but Kensington Palace was also a gilded cage. While its inhabitants were cocooned in comfort and splendour, successful courtiers had level heads and cold hearts; their secrets were never safe. Among them, a Vice Chamberlain with many vices, a Maid of Honour with a secret marriage, a pushy painter, an alcoholic equerry, a Wild Boy, a penniless poet, a dwarf comedian, two mysterious turbaned Turks and any number of discarded royal mistresses.

Lucy Worsley is a participant in The National Archives Writer of the Month programme.