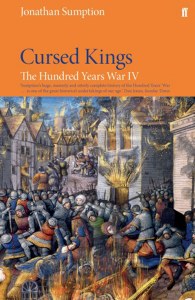 Cursed Kings tells the story of the destruction of France by the madness of its king and the greed and violence of his family. In the early fifteenth century, France had gone from being the strongest and most populous nation state of medieval Europe to suffering a complete internal collapse and a partial conquest by a foreign power. It had never happened before in the country's history - and it would not happen again until 1940.

Into the void left by this domestic catastrophe, strode one of the most remarkable rulers of the age, Henry V of England, the victor of Agincourt, who conquered much of northern France before dying at the age of thirty-six, just two months before he would have become King of France. Following on from Divided Houses (winner of the Wolfson History Prize and shortlisted for the Hessel-Tiltman), Cursed Kings is the magisterial new chapter in 'one of the great historical works of our time' (Allan Massie).

Henry V: The Conscience Of A King