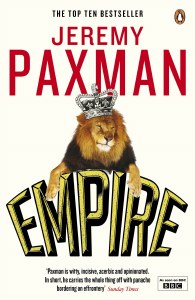 The influence of the British Empire is everywhere, from the very existence of the United Kingdom to the ethnic composition of our cities. It affects everything, from Prime Ministers' decisions to send troops to war to the adventurers we admire. From the sports we think we're good at to the architecture of our buildings; the way we travel to the way we trade; and, the hopeless losers we will on, and the food we hunger for, the empire is never very far away.

In this acute and witty analysis, Jeremy Paxman goes to the very heart of empire. As he describes the selection process for colonial officers ('intended to weed out the cad, the feeble and the too clever') the importance of sport, the sweating domestic life of the colonial officer's wife ('the challenge with cooking meat was 'to grasp the fleeting moment between toughness and putrefaction when the joint may possibly prove eatable") and the crazed end for General Gordon of Khartoum, Paxman brings brilliantly to life the tragedy and comedy of Empire and reveals its profound and lasting effect on our nation and ourselves.