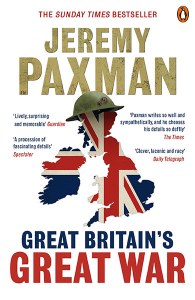 Jeremy Paxman's magnificent history of the First World War tells the entire story of the war in one gripping narrative from the point of view of the British people. "If there is one new history of the war that you might actually enjoy this is very likely it". (The Times).

"Lively, surprising and memorable'. (Guardian). "A procession of fascinating details".

(Prospect). "Paxman writes so well and sympathetically and he chooses his detail so deftly'. (The Times).

"Clever, laconic and racy'. (Daily Telegraph). Life in Britain during the First World War was far stranger than many of us realize.

In a country awash with mad rumour, frenzied patriotism and intense personal anguish, it became illegal to light a bonfire, fly a kite or buy a round of drinks. And yet the immense upheaval of the war led to many things we take for granted today: the vote, passports, vegetable allotments and British Summer Time among them. In this immensely captivating account, Jeremy Paxman tells the entire story of the war through the experience of those who lived it - nurses, soldiers, politicians, factory-workers, journalists and children - explaining why we fought it so willingly, how we endured it so long, and how it transformed us all.

"A profoundly personal and thought-provoking new analysis of the Great War". (Mail on Sunday). "One is left with a better understanding of how the Great Britain that began the war became more like ordinary Britain by its end".

(Sunday Times). "A judicious mix between individual stories and the bigger picture ...engages the mind and emotions". (Daily Telegraph).

"Particularly good in showing how much a modern perspective distorts our understanding". (Prospect). "Incisive, colourful.

Paxman delves into every aspect of British life to capture the mood and morale of the nation". (Daily Express). Jeremy Paxman is a renowned broadcaster, award-winning journalist and the bestselling author of seven works of non-fiction, including The English, The Political Animal and Empire.