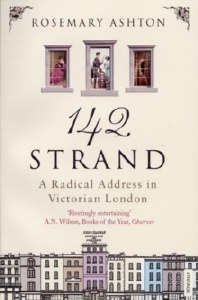 142 Strand was the home of the brilliant, unconventional young publisher John Chapman. All the daring and avant-garde writers and thinkers of Victorian London gathered here, among them Carlyle, Dickens, Thackeray; Americans like Emerson and refugees from revolutionary Europe like Mazzini. In 1851 Chapman brought Marian Evans - the future George Eliot - to London where her arrival caused rows in the household, which included Chapman's wife and also his mistress.

The Strand was packed with booksellers, magazine publishers, theatres, clubs, and quack doctors. Only a short distance away were Westminster, the Houses of Parliament and the disreputable pornographers of Holywell street. Chapman's circle touched all these worlds, and the vivid story of these unconventional lives and unorthodox views - marvellously told by Rosemary Ashton - takes us to the heart of Victorian culture, uncovering its surprising energy, its doubts and arguments, and, above all, its passionate reforming spirit.

London : a Life in Maps