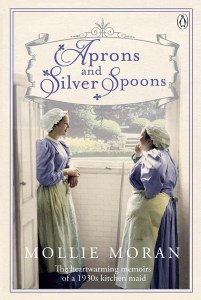 Aprons And Silver Spoons : What Was it Really Like to Live Below Stairs in the 1930's

If you liked Downton Abbey and Upstairs, Downstairs, it's time to discover the reality in the true story Aprons and Silver Spoons by Mollie Moran.

When young Mollie became a 'skivvy' in a stately London townhouse aged just 14, she quickly learned that a large amount of elbow grease and a sense of humour would be tantamount to surviving there. Through Mollie's eyes we are offered a fascinating glimpse into London's invisible 'downstairs', a world that has long-since vanished: cooking huge roast dinners, polishing doorknobs, scrubbing steps - and covering up her employers' scandals.

Going to dances with her fellow servants and flirting with Harrods' errand boys, she had no idea that the oncoming war in 1939 would change her world, and that of those she served, forever...Discover the real hardships and rewards for a pre-war domestic servant in Mollie Moran's charming memoir Aprons and Silver Spoons. Mollie Moran is now ninety-six, living in Bournemouth where she still continues to demonstrate her skills in the kitchen by hosting huge dinner parties. Over eighty years after starting as a scullery maid in London, she still keeps in touch with Flo, the kitchen maid, and her life-long friend.