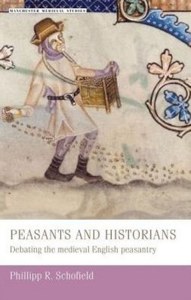 Peasants and historians is an examination of historical discussion of the medieval English peasantry. In this book, the first such study of its kind, the author traces the development of historical research aimed at exploring the nature of peasant society. In separate chapters, the author examines the three main defining themes which have been applied to the medieval economy in general including change affecting the medieval peasantry.

In subsequent chapters debates in relation to demography, family structure, women in rural society, and the nature of village community are each considered in turn. A final chapter on peasant culture also suggests areas of development and, potentially at least, future directions in research and writing. Offering an informed grounding in the main areas of historical writing in this area, it will be of interest to researchers as well as to those coming new to the topic, including undergraduate and postgraduate students.