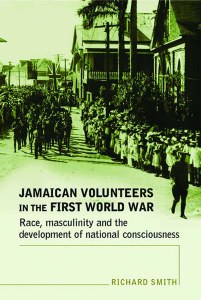 This groundbreaking study examines the dynamics of race and masculinity to provide fresh historical insight into the First World War. It examines, in detail, the experiences of Jamaicans who served in the British West Indies Regiment and other British regiments.
From the earliest days of the war there was reluctance to accept Jamaican and other West Indian volunteers. Black volunteers were deemed to lack the masculine qualities of stoicism and self control necessary to modern warfare. But more significantly, prewar fears of white racial degeneration merged with concerns that many white men could not withstand the psychological effects of modern warfare. If Imperial race and gender hierarchies were to be preserved, black soldiers could not be seen to outperform white soldiers on the battlefield and so were generally deployed in labour battalions.

This study also provides a comprehensive discussion of the war's impact on anti-colonial struggles in the West Indies. Despite their exclusion from the front line, black Jamaican volunteers appropriated codes of military heroism, sacrifice and citizenship. After the war, veterans enlisted the idealised imagers of chivalric combat to support demands for land and political enfranchisement, culminating in the nationalist upsurge of the late 1930s.

A lively and accessible account that will prove invaluable to undergraduates studying the Imperial dimensions of the First World War. It will also be of great interest to students exploring the broader implications of race and masculinity in the British Empire and to the general reader interested in warfare or black history.

My Ancestor Settled in the British West Indies