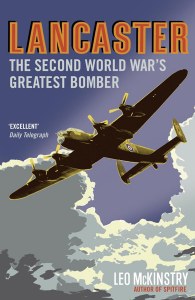 The Spitfire and the Lancaster were the two RAF weapons of victory in the Second World War, but the glamour of the fighter has tended to overshadow the performance of the heavy bomber. Yet without the Lancaster, Britain would never have been able to take the fight to the German homeland.

This highlights the scale of the bomber’s achievements, including the famous Dambusters attacks.With its vast bomb bay, ease of handling and surprising speed, the mighty Lancaster transformed the effectiveness of the Bomber Command. Whilst addressing the political controversy surrounding the bombing offensive against Germany, Leo McKinstry also weaves individual tales into this compelling narrative. Rich characters are brought to life, such as Roy Chadwick the designer, who taught himself engineering at night school and Sir Arthur Harris, the austere head of the Bomber Command.

This is a rich saga, a story of triumph over disaster and the history of an iconic plane.