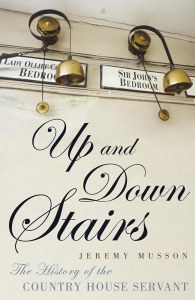 Country houses were reliant on an intricate hierarchy of servants, each of whom provided an essential skill. Up and Down Stairs brings to life this hierarchy and shows how large numbers of people lived together under strict segregation and how sometimes this segregation was broken, as with the famous marriage of a squire to his dairymaid at Uppark. Jeremy Musson captures the voices of the servants who ran these vast houses, and made them work.

From unpublished memoirs to letters, wages, newspaper articles, he pieces together their daily lives from the Middle Ages through to the twentieth century. The story of domestic servants is inseparable from the story of the country house as an icon of power, civilisation and luxury. This is particularly true with the great estates such as Chatsworth, Hatfield, Burghley and Wilton.

Jeremy Musson looks at how these grand houses were, for centuries, admired and imitated around the world.