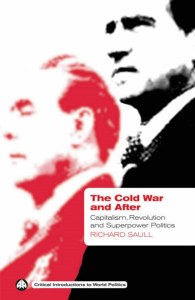 The Cold War and After : Capitalism, Revolution and Superpower Politics

The Cold War is often presented as an international power struggle between the Soviet Union and the US. Richard Saull challenges this assumption. He broadens our understanding of the defining political conflict of the twentieth-century by stressing the social and ideological differences of the superpowers and how these differences conditioned their international behaviour.

Saull argues that US-Soviet antagonism was part of a wider conflict between capitalism and communism involving states and social forces other than the superpowers. The US was committed to containing revolutionary and communist movements that emerged out of uneven capitalist development. In highlighting the socio-economic and ideological dimensions of the Cold War, Saull not only provides a richer history of the Cold War than mainstream approaches, but is also able to explain why revolutionary domestic transformations caused international crises.

Tracing the origins of new resistance to American global power, Saull's book provides an ideal alternative perspective on the Cold War and its end.