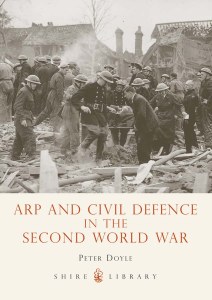 In the late 1930s, when war seemed inevitable and it was realised that aerial attack would be the greatest threat posed by any coming conflict, the government established a volunteer organisation Air Raid Precautions or ARP that would stand at the centre of the wartime civil defence. Members of the ARP distributed gasmasks to the population and policed the blackout. Once raids started they played a vital role in shepherding people to shelter, reporting on damage and rescuing people from wrecked buildings. Alongside the ARP the Auxiliary Fire Service (later the NFS), Police, Fire Guard and Women’s Voluntary Service worked to deal with the effects of bombing raids and to minimise the suffering of the British people. Together they formed the Civil Defence Services, and this book is their history.