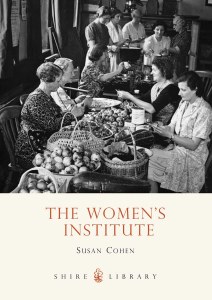 When the first Women’s Institute was formed in Llanfair, Wales in October 1915, no one could have foreseen how this small-scale experiment would grow to become, by the early twenty-first century, an organisation with a membership of approximately 205,000 in 6,500 branches in towns, cities and villages across Britain. The organization instilled a new and enterprising spirit into the life of villages and their womenfolk, and gave them unique opportunities to share activities. This book traces the story and evolution of the WI: through the decades punctuated by two world wars, where food preservation and handicrafts, drama groups and choirs, charabanc outings and running market stalls were the mainstays of the organization, to the new challenges and opportunities which unite members in the twenty-first century.

Introduction
Origins of the Institute
The Early WIs
From Farm and Garden to Kitchen and Stall
Arts and Leisure
The Second World War
A New Era Dawns: the 1940s to 1960s
From the 1970s to the New Millennium
Further Reading

A Force To Be Reckoned With : A History of the Women's Institute