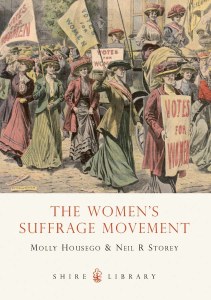 This book is an overview of the struggle for women to gain the vote in Great Britain and explores who the women were that formed and led or became members of the women’s suffrage movement. Early campaigners and pressure groups in the nineteenth century led to the formation of National Union of Women's Suffrage Societies in 1897; many women within this group became increasingly frustrated with the lack of progress in their campaign to win the vote and, led by Emmeline Pankhurst, they broke away and formed the Women’s Social and Political Union in 1903 . In 1914 the WSPU suspended militant action so as to ‘do their bit’ during the First World War and by 1918 women were taking the place of working men at home and were serving in uniform and as a result the first women were granted the vote in 1918. Based on contemporary accounts, documents, ephemera and photographs this is a very useful condensed history suitable for family historians, students and anyone interested in social history.