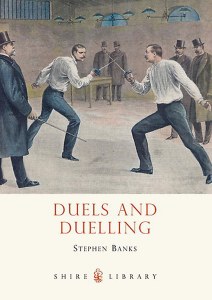 A duel could be fought over a matter as trifling as a slip of the tongue or as serious as a public accusation of corruption. At the height of its formality, two men at odds would meet at dawn, armed either with swords or pistols and could fight to the death, to the first blood, or one could even fire pointedly away from his opponent. Though duels were illegal, gentlemen considered it their prerogative to fight, and figures as prominent as the Duke of Wellington and Georges Clemenceau would meet their opponents face to face. Why were the participants willing to flout the law, who chose the time, place, weapons and seconds, and what were the consequences for victims and victors? Stephen Banks explains these things and examines the duel's evolution from Norman trials by combat to the formalisation of the duel in the late eighteenth century, its decline in England in the mid-nineteenth century and its final death in Europe by the twentieth century.