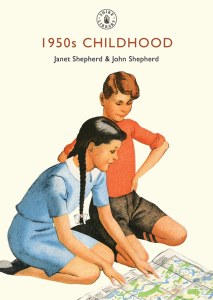 Children of the 1950s have much to look back on with fondness: Muffin the Mule, Andy Pandy, and Dennis the Menace became part of the family for many, while for others the freedom of the riverbank or railway platform was a haven away from the watchful eyes of parents. The postwar welfare state offered free orange juice, milk and healthcare, and there was lots to do, whether football in the street, a double bill at the cinema, a game of Ludo or a spot of roller-skating. But there were also hardships: wartime rationing persisted into the '50s, a trip to the dentist was a painful ordeal, and at school discipline was harsh and the Eleven-Plus exam was a formidable milestone.

Janet Shepherd and John Shepherd examine what it was like to grow up part of the Baby Boomer generation, showing what life was like at home and at school and introducing a new phenomenon - the teenager.