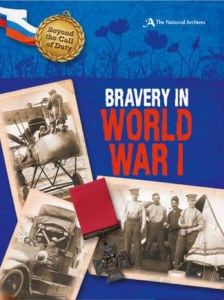 Bravery In World War I : Beyond The Call of Duty

Could you shoot down an enemy plane, or help other soldiers when shells and gas were exploding around you? Could you act calmly when facing an enemy tank, or carry a wounded man across muddy ground and enemy gunfire? That is just what the people in this book did! Bravery in World War I gives accounts of members of the armed forces of who risked their own lives to help others in frightening and dangerous situations. Find out how these heroic individuals acted under great pressure, how people were awarded for their bravery, and more about the events of the war they were fighting in. Documents, images and records from The National Archives have been used to recreate each real-life act of courage.

Context panels give more information about the events of the World Wars, and the reasons that people were put in dangerous situations. A great study guide for the events World War 1, bringing together real life experiences with explanations of key events and people of the First World War. 'A second thought' feature boxes ask readers to think again about the story they have read and aspects of it that would have required difficult and quick decision making.

The Beyond the Call of Duty series remembers and records acts of great bravery in both World Wars. Other titles in the series look at the courage of people in the Second World War, of civilians and of animals in wartime.