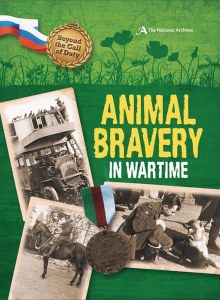 Throughout history, the armed forces have had help from brave creatures, from horses on cavalry charges to messenger dogs and carrier pigeons. Beyond the Call of Duty gives accounts of outstanding bravery and courage in wartime. This title looks at animals in the World Wars and how they risked their lives, without choice, to help humans in frightening and dangerous situations.

Documents, images and records from The National Archives have been used to recreate each real-life act of courage. The book concludes with a look at 'research and records' giving more information about the evidence that exists for these stories today. Context panels give more information about the events of the World Wars giving explanation for why animals were taken into these frightening and dangerous situations.

Where animals have been awarded PDSA Dickin Medal for gallantry for their act of bravery, the story is accompanied by a fact panel that gives details of the event and date. We discuss the idea of bravery and how it applies to animals. We look at the conscription of animals into the armed forces and recognise the fact that they had no choice.

Among the brave animals in this book are: . the war horses taken to the Western Front and on the home front in the Blitz. .

the dogs that were used as messengers, in both World Wars and those that were taught to parachute and sniff out unexploded mines. . carrier pigeons that covered huge distances in time to save lives and play a vital role in the Resistance.

. the mules who were used in the front line and in Burma . the camels that were key to the British war effort in the middle east.

. the elephants that helped with transport, carrying, and even building roads and bridges in the rainforest. .

Wojtek, the bear adopted by a Polish regiment in World War II . the mascots that accompanied troops all over the world The Beyond the Call of Duty series remembers and records acts of great bravery in both World Wars. Other titles in the series look at the courage of members of the armed force and of civilians.