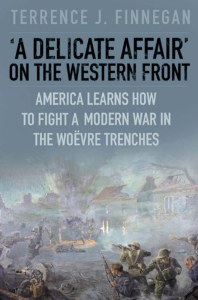 'A Delicate Affair' On The Western Front

" A Delicate Affair " on The Western Front.

The American military was experienced in fighting guerilla war. It now had to come to terms with global responsibilities - and it was woefully unprepared for la grande guerre. Forgotten by most Americans in understanding their country's rise to military pre-eminence in the modern era is the debt owed to the tutorial of the French, whose knowledge was bought at a high price in the early days of the war, when catastrophic losses combined with the 'offence' of losing ground could lead to summary execution.

The Americans went to the front line for the first time (in the Woevre region around the village of Seicheprey) with the same enthusiasm as their Allies had shown three years prior. It was in the spirit of a game, a great adventure. But the Germans saw them as novices; and they were determined to teach them this was no game.

They proceeded to unleash the war's most ghastly weapons - gas, flamethrowers and high explosives - and called their first major raid, with gallows humour, Einladung, an invitation. The courage and tenacity of the individual American soldier at this time showed German commanders that they now faced a fresh enemy with purpose. Those virtues, however, were not complemented by teamwork and effectiveness in US high command.

The 'delicate affair' at Seicheprey, as George Marshall would later describe it, was well known by every American soldier who fought in 1918 but with the passage of time faded away, until now. By returning to primary sources throughout, Colonel Finnegan tells the story of the United States entry into the war and at the same time uses this as as a jumping-off point to describe how all battles developed in the war, through firepower, intelligence (or lack of it) and minute-by-minute command decisions. He provides what is probably the most complete account of how the Germans planned an operation ever published (most of the data having been destroyed in the Potsdam raid of 1945).

With an extraordinary collection of contemporary maps and direct testimony from the men of the "Fighting First" and "Yankee" Divisions, A Delicate Affair is a valuable addition to the historiography of the First World War.