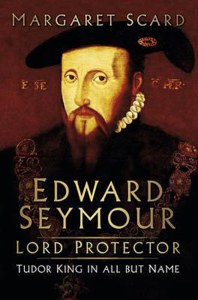 In January 1547 Henry VIII lay dying. His heir was just 9 years old and all England waited expectantly to see who would hold the reins of power until Edward VI came of age. Within days of Henry's death, the privy council overturned the terms of his will and Edward Seymour, Duke of Somerset was named Lord Protector.

It was a decision that the men in power would come to regret. For nearly three years, Somerset was 'king in all but name', the most powerful man in England. But though he was a skilled soldier and leader on the battlefield, Somerset's political skills were not so well-honed. His efforts to lessen the authoritarian rule imposed by Henry VIII and to improve the well-being of the common folk led to widespread rebellion, and as his attempt to subdue the Scots failed, England faced war with France. To the people Edward Seymour was the 'Good Duke'. To his fellow Councillors he was a traitor.

This is a story of Tudor ambition, power and the ultimate price of failure.