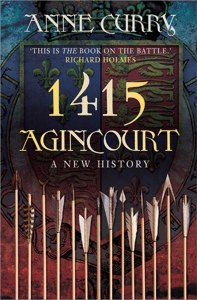 As night fell in Picardy on Thursday 24 October 1415, Henry V and his English troops, worn down by their long march in search of a crossing of the Somme, can only have dreamt that the battle of the next day would be remembered as one of the most momentous victories ever won. Six hundred years down the line, the battle of Agincourt still rings through the centuries. In this stupendous victory English and Welsh archers who formed the bulk of Henry's army prevailed against large numbers of French men-at-arms and cavalry.

This startling and revisionist history recreates the campaign and battle from the perspectives of the English. Acclaimed as one of the best battle accounts ever published, Anne Curry has updated her classic work in honour of the 600th anniversary of Agincourt.

This book by Anne Curry is a very comprehensive account of the Battle of Agincourt and the causes that led to it, as part of the Hundred Years War between France and England. It was originally published in 2005, and has been updated to coincide with the anniversary of the battle. Each chapter, of which there are ten, details the events that led to the battle as well as background information. This is vital as the book covers a significant event that was a small part of a complicated and turbulent time in English history. The first chapter deals with Henry V's Inheritance in England and France, which had begun as far back as 1340 when Edward III had first declared him self King of France as the rightful heir. Subsequent chapters deal with the reopening of the war, raising an army, the siege of Honfleur, assembling of the armies, the battle and finally its aftermath. There are copious illustrations, maps, charts, statistics and a comprehensive bibliography. Anne is a Professor of Medieval History at the University of Southampton and the world's leading authority on Agincourt. She has produced other titles on Agincourt and the Hundred Years War. The book is comprehensive and well researched, but its greatest appeal would probably be to historians with either specialised knowledge or a passion for detailed information on the battle and the circumstances surrounding it. Bronwyn Fraley Friends of The National Archives