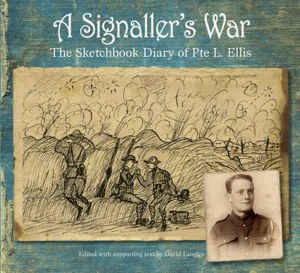 A Signaller's War : The Sketchbook Diary of Pte. L Ellis

As the First World War roared into its second year, 17-year-old Lawrence Ellis marched into his recruitment office and signed up, eager to fight for King and Country. Underage, as so many were, it wasn't until he had cut his teeth in the Royal Field Artillery that Ellis joined the Corps of Royal Signallers. It was some years after the war, however, that the private began to commit his memories to art and words.

A Signaller's War is based on extracts from Pte Lawrence Ellis' diary and a selection of his sketches. David Langley brings together the chosen extracts with background information, thoughts and conclusion that helps to complete the narrative and build the picture of Lawrence Ellis' experiences in the First World War. In the Spring of 2014, when covering for a colleague, David Langley was offered the chance to look at some sketches that a Year 9 student had brought in, they had apparently been drawn by the student's great-grandfather. From the first sighting of the sketches David Langley was captivated and fitted together as full a picture as possible of Pte L. Ellis' experiences. He did this by talking to ex-servicemen and visiting archives and museums around Europe. Born in Tottenham Middlesex in 1899, Pte Ellis was under age, as so many were when he joined the Royal Field Artillery (RFA) in September 1915. His rank was at first a driver, as he was an inch too short to be a gunner. Later in November 1915 he joined the signallers attached to the RFA. The narrative and sketches, which were completed some years after the war, begin with the recruitment, medical and basic training. The naive sketches are full of detail, down to reflection in the mirror of a fellow recruit at the medical examination. The diary extract describes with some humour how 'measurements were taken, lengthways and sideways' and later Pte Ellis states 'my physique was but puny and it was only by tremendous effort my chest had been expanded to the required dimensions'. The humour is later mixed with the mental and physical tiredness, the deafening sound of bursting shells, the living conditions in the trenches and the devastation of life and surroundings over the fours years of Pte Ellis' experience in France. This paperback book is an easy read and would suit readers interested in a soldiers life in the First World War, the military element in general and of course the personal aspect of the diary extracts and the sketches. There is an Index and also a Glossary at the back of the book. The cover is shown as worn and a little frayed as though it has been through the war. On the front cover is a sketch with an inset photo of Pte L. Ellis. The back cover includes an outline of the book and also a sketch with the poignant caption of 'Poppies on an unknown soldier's grave. Near Pulse Farm', which is a very suitable ending to the book. Jean Cheshire Friends of The National Archives http://nationalarchives.gov.uk/get-involved/friends.htm