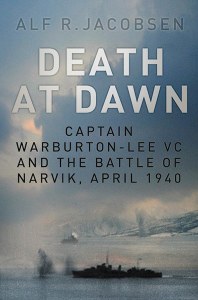 Death at Dawn : Captain Warburton-Lee VC and the Battle of Narvik, April 1940

In the great and gallant tradition of the Royal Navy, Captain Bernard Warburton-Lee followed the call of Winston Churchill, then First Lord of the Admiralty, to lead his flotilla into hostile waters through 50 miles of blizzards. His ships delivered a crushing blow to the Nazi German squadron then occupying Narvik, the famous Arctic iron-ore port. Only moments later, a salvo of German shells smashed the bridge of HMS Hardy, killing Warburton-Lee and several of his officers.

His last signal to his fellow men was without fear: 'Keep on engaging the enemy!' With his death, the Royal Navy had lost one of its youngest and most talented officers: a truly human hero. Death at Dawn is the epic retelling of the first Battle of Narvik, fought over the course of two days, during which two German destroyers were sunk and six damaged. Utilising first-hand accounts, including letters from Warburton-Lee to his wife Elizabeth.