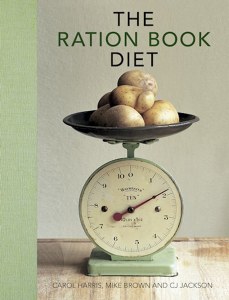 In 1939, Britain was preparing for war. As well as building aeroplanes and digging Anderson shelters, this meant managing food supplies for the home front. The Ministry of Food rose to the challenge, introducing rationing, encouraging the nation to dig for victory, and issuing cookbooks and health advice.

Drawing inspiration from Britain's 'finest hour', when the thrifty British housewife had to grow her own veg, stretch the butter ration and still keep her family fighting fit, this is both a social history of wartime dining and a collection of over sixty delicious and healthy seasonal recipes with a vintage twist.

I thoroughly enjoyed reading the Ration Book Diet by Mike Brown and Carol Harris who are experts on the Second World War Home Front and C. J Jackson a freelance food consultant, writer and cook. Their collaboration has produced an excellent, easy to read book which outlines the Government's journey from planning, to introducing and controlling food supplies by rationing within a points system, necessitated by the lessons learned from World War One. The book outlines how the Government encouraged everyone to 'Dig on for victory' by growing their own fruit and vegetables and making jam from seasonal fruits (when extra sugar would be made available). The book highlights how specially devised recipes were published and families were able to eat sensible but filling portions, low in fat and high in fibre, often using their home grown produce. A classic dish being Woolton Pie, named after the wartime food minister. There was no temptation to snack in between meals because there wasn't anything extra to snack on! We are informed that the Government suggested people walked instead of using public transport or cars because of the shortage of fuel. The added exercise and the rationed diet led to a healthier nation even after six years of war. The reader is treated to a variety of excellent original wartime recipes, including the famous Woolton Pie. Some recipes have been adapted for modern day living. They are categorised into availability by seasons. Nutritional values can be found after each recipe. The lovely colourful illustrations comprising wartime posters, advertisements and pictures of wartime recipe booklets are interspersed within the book. I highly recommend this lovely book and encourage you to try some of the recipes. I'm sure you will be pleasantly surprised! Stella Sass Friends of the National Archives http://nationalarchives.gov.uk/get-involved/friends.htm