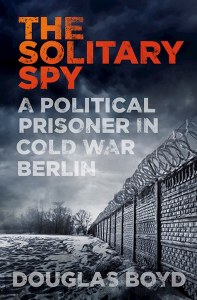 The Solitary Spy : A Political Prisoner in Cold War Britain

Of the 2.3 million National Servicemen conscripted during the Cold War, 4,200 attended the secret Joint Services School for Linguists, tasked with supplying much-needed Russian speakers to the three services. The majority were in RAF uniform, as the Warsaw Pact saw air forces become the greatest danger to the West. After training, they were sent to the front lines in Germany and elsewhere to snoop on Russian aircraft in real time.

Posted to RAF Gatow in Berlin, ideally placed for signals interception, Douglas Boyd came to know Hitler's devastated former capital, divided as it was into Soviet, French, US and British sectors. Pulling no punches, he describes the SIGINT work, his subsequent arrest by armed Soviet soldiers one night on the border, and how he was locked up without trial in solitary confinement in a Stasi prison. The Solitary Spy is a unique account of the terrifying experience of incarceration and interrogation in an East German political prison, from which Boyd eventually escaped one step ahead of the KGB.