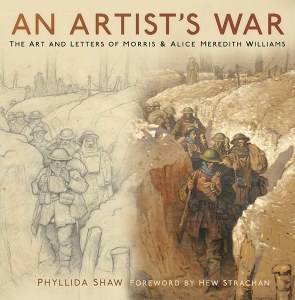 An Artist's War : The Art and Letters of Morris and Alice Meredith Williams

When the First World War broke out, Morris Meredith Williams was living in Edinburgh with his wife Alice, a sculptor, and earning his living from book illustration and teaching. A short man, his attempt to join the army in 1914 failed, but six months later he was accepted by the 17th Battalion, The Welsh Regiment, the first Bantam battalion to be raised in Wales. From June 1916, he spent ten months in and out of the trenches of the Western Front near Loos, Arras and the Somme, later mapping enemy positions from aerial reconnaissance shots with the Heavy Artillery.

In 1918 he joined the Royal Engineers' camouflage unit at Wimereux. After the peace, he was among a handful of artists kept back to make paintings for the official record and toured the shattered landscape in an old ambulance car. Never without a sketchbook and pencils in his pocket, he drew at every opportunity, producing an extraordinary record of his surroundings.

After the war some of the sketches became oil paintings while others inspired a series of war memorials in bronze, stone, wood and stained glass, most notably for the Scottish National War Memorial, on which he and Alice worked together. In this stunning book, the Meredith Williams's art is displayed in fine style, ranging from the touching and heartfelt to the most brutal, stark images of the waste and loss of war.

In June 1916 Morris Meredith Williams, a 38 year old art master from Fettes College in Edinburgh, went to war in France armed with a supply of pencils and sketch books in which he was to record his experiences of the conflict over the following three years. The story of his war, spent first in the trenches and later in mapmaking and camouflage units, is told in the hundreds of drawings - and occasional watercolours - which make up the main body of this book. I was surprised to discover that most of the drawings, simply but exquisitely executed, had never been published before. Meredith Williams was not an official war artist and he never achieved widespread recognition from the art establishment. This, writes military historian Hew Strachan in his foreword, is because he 'was not self-evidently modernist'. There is no doubt, however, that these images from his sketchbooks - which he carried with him wherever he went - provide an evocative backdrop to the letters he exchanged with his wife and fellow artist Alice throughout the war. Most of the drawings concentrate on the day-to-day events of a battalion in the field. Careful to avoid any gory details in his letters home, he doesn't flinch from portraying death and decay with his pencil wherever he sees them. The drawings are the main focus of the book. Other aspects of Meredith Williams' life - his pre and post-war days, including his belated commission as a war artist in 1919 - serve mainly as 'bookends'. There is a substantial section at the end which rightly acknowledges the post-war work he did with Alice, a sculptor of some considerable renown. Together they were responsible for the design and execution of the magnificent bronze frieze covering five walls of the Scottish National War Memorial in Edinburgh as well as a number of other official commissions. However, this is essentially Morris's book. It is a beautiful book about one man's war that throws up new and compelling images each time one opens it. I highly recommend it. Susan Littledale Friends of the National Archives