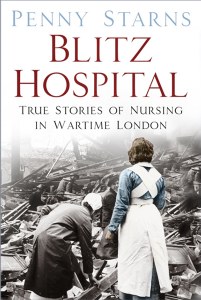 When the Blitz hit London, everything changed. Once, the Home Front was relatively safe - now it wasn't. Suddenly, London was its own front line.

Blitz Hospital follows the fortunes of two major London hospitals as they struggled to cope with mounting wartime casualties: St Thomas' and The London. The diaries, letters and reports of medical and nursing staff highlight the many human stories of tremendous courage and hope that lived and breathed within the corridors of London's hospitals during the Blitz.

Blitz Hospital: True Stories of Nursing in Wartime London By Penny Starns Published by The History Press, 2018 The author is an established historian with previous titles to her name about such Second World War topics as the lives of children during the Blitz and the stories of others evacuated overseas. Blitz Hospital follows events in two major London hospitals, St Thomas's and The London, dealing with mounting wartime casualties: victims of bombing, injured members of the forces, and even captured enemy airmen. The book describes the horrific events of the Blitz itself from September 1940 to May 1941 (London was bombed for 56 of 57 consecutive nights), but then also the later attacks by the V2 flying bombs, estimated to have killed over 2,500 civilians and only ceasing in March 1945. During all this time the two hospitals not only had to cope with victims of war needing urgent medical attention, but also themselves suffered both extensive damage and staff being killed as a result of the raids. Against this background and what really makes the book most worth reading is that much of the content comes from the diaries, letters and reports of the hospitals' medical and nursing staff. The accounts coming from trainee nurses are the most revealing, telling stories of young women coming from different backgrounds having to face up to not just the normal demands of nursing life looking after sick and injured people, but this against a background of frightening air attacks, poor wages, unappetising hospital food, antiquated restrictions on what they could wear and the continuing draconian rules about behaviour enforced and only occasionally relaxed by some matrons. Yet one young woman from the East End who came to the London Hospital as a probationer nurse in 1939 was to conclude her final wartime diary entry "Every single one of us has played a part in saving London." John Hutchings Friends of the National Archives http://nationalarchives.gov.uk/get-involved/friends.htm

A History of Nursing

Nursing Through The Years

The Story of Florence Nightingale