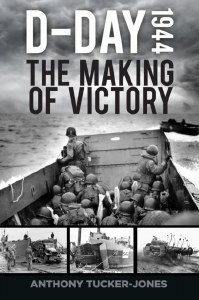 D-DAY was unprecedented. An invasion of this scale and magnitude had never been carried out before. The landings in North Africa, Sicily and Italy were of limited scope by comparison; if they had failed it would not have been a complete disaster, whereas Normandy heralded the long-awaited Second Front.

This dramatic new study investigates the great feats of unique problem-solving that enabled the success of such an important invasion. Military historian Anthony Tucker-Jones brings his expert eye to bear on the D-Day landings and subsequent Normandy campaign. He reassesses the technical ingenuity required through the eyes of those who fought there, and vividly reveals how each side managed, whether dealing with the challenges of crossing the Channel safely or in defence of the French coast.

Including first-hand accounts, D-Day 1944 places the reader in the thick of the action.

Anthony Tucker-Jones is an established military historian and defence writer. He worked within the British Intelligence Community for twenty years and has subsequently worked with the BBC, Channel 4 and the History Channel. D-Day The making of victory is one book in an impressive list of books written by the author. The Introduction opens with a description of the 6th June 1944 Operation Overlord landings on the Normandy beaches. Thousands of service men were out of their comfort zones coping with not only their fears of the unknown but also Hobart's Funnies. The author writes at the end of the Introduction that 'It was problem-solving on an unprecedented scale that helped ensure D-Day was not a complete and utter bloodbath. Overlord was truly the appliance of science and a battle of the boffins.' The book covers the period from early 1944 through to the Axis retreat from Paris in the wake of the Allies advancement in late summer 1944. The author highlights the development, trials, acceptance, and in some cases, the rejection of ideas to overcome the perceived problems with the planning and subsequent completion of the D-Day landings. This 300-page hardback book includes interesting quotes and insights from both the Allied and Axis positions which helps to bring the whole situation together for the reader. Although there is some technical detail, the book is not difficult to read for a reader new to the subject. There are a number of appendices included at the back of the book, as well as Notes and References, Bibliography and Index. Jean Cheshire Friends of the National Archives http://nationalarchives.gov.uk/get-involved/friends.htm