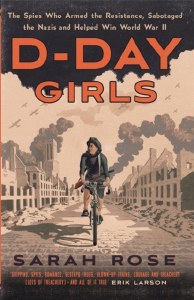 In 1942, the Allies were losing, Germany seemed unstoppable, and every able man in England was fighting. Believing that Britain was locked in an existential battle, Winston Churchill had already created a secret agency, the Special Operations Executive (SOE), whose spies were trained in everything from demolition to sharpshoot-ing.

Their job, he declared, was to 'set Europe ablaze'. But with most men on the front lines, the SOE was forced to do something unprecedented: recruit women. Thirty-nine answered the call, leaving their lives and families to become saboteurs in France.

In D-Day Girls, Sarah Rose draws on recently de-classified files, diaries, and oral histories to tell the thrilling story of three of these remarkable women. There's Andree Borrel, a scrappy and streetwise Parisian who blew up power lines with the Gestapo hot on her heels; Odette Sansom, an unhappily married suburban mother who saw the SOE as her ticket out of domestic life and into a meaningful adventure; and Lise de Baissac, a fiercely independent member of French colonial high society and the SOE's unflap-pable 'queen'. Together, they destroyed train lines, ambushed Nazis, plotted prison breaks, and gathered crucial intelligence-laying the groundwork for the D-Day invasion that proved to be the turning point in the war.