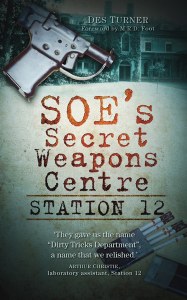 The full story of Aston House in the Second World War has never been told before. Its activities were top secret and as important to the Allied war effort as those of Bletchley Park, but in a different way. Situated near Stevenage, Aston House was one of many British country houses requisitioned during the Second World War by the Special Operations Executive (SOE).

Born out of Bletchley Park, where it began life as SIS Section 'D' (for Destruction), Station 12's scientific and military personnel invented, made and supplied 'toys' for the Resistance, Commandos, Special Boat Service and SAS. Included in their deadly arsenal were plastic explosives, limpet mines, pressure switches, tree spigots, incendiary bombs, incendiary liquids and arrows, and a variety of time fuses. They worked on the tools for famous operations, such as the St Nazaire and Bruneval Raids and the assassination of Reinhard Heydrich.