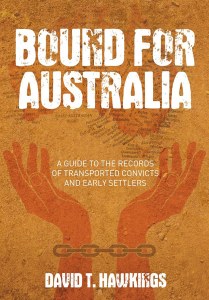 Bound for Australia: A Guide to the Records of Transported Convicts and Early Settlers

From the arrival of the first 788 convicts in 1788, to the end of transportation in 1868, a staggering 165,000 criminals were sent to Australia for a range of crimes. In addition to those transported, hundreds of thousands of free persons emigrated from Britain and Ireland to colonies in Australia.

Because of the vast distance involved, few returned, and the descendants of many of them now live in Australia. Tracing those ancestors today may seem like a daunting task, with The National Archives alone holding over 100 miles of shelving for historical records. Now completely revised and expanded to include new research, Bound for Australia is the essential guide to these records.

By directing the reader straight to the relevant files and providing a case study to follow the stages necessary to research your Antipodean relatives, Hawkings makes locating you Australian ancestors more achievable than ever before. Who knows, you may even trace your ancestor to the victualling list of 788 criminals on the First Fleet.

This very useful publication is a much expanded and revised edition of a work that first appeared in 1987. As noted in the foreword, there are eight new chapters that, together with the revised ones, provide a comprehensive guide to the extraordinary story of eighteenth and nineteenth-century emigration to Australia. The general reader, as well as the researcher, will find a host of fascinating detail throughout the book including case studies, private letters, and a variety of official documents. Together, they make one realise the complexity of the emigration experience which included from 1788 to 1868 the forced transportation of thousands of British and Irish men, women and children to the far side of the world to begin new lives. Few had the resources or will to return, having served their sentences. But, as noted in the book, transportation required a myriad of others: soldiers (with their families) to ensure law and order, officials to administrate, sailors to man the ships that made the passage to and from Australia - plus those back in England responsible for the scheme’s implementation. For those wishing to start the search for an individual, David Hawkings gives, among other detail, the relevant file references in the Home Office, Colonial Office and Privy Council records held at The National Archives. There is a wealth of information available; this is an invaluable guide to using it. Very helpfully, David Hawkings’ notes at the beginning of each chapter and in other parts of the book give a constant steer to the inquirer. And who knows? A useful index of personal names at the back may provide an unexpectedly fast link to the researcher who is trying to trace details of his or her family members who went off to Australia so long ago. Ian Hay-Campbell Friends of The National Archives.

Convicts in the Colonies

The Luck Of The Irish