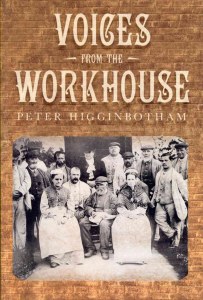 Voices From the Workhouse

Voices From the Workhouse

Voices from the Workhouse tells the real inside story of the workhouse - in the words of those who experienced the institution at first hand, either as inmates or through some other connection with the institution. Using a wide variety of sources ? letters, poems, graffiti, autobiography, official reports, testimony at official inquiries, and oral history, Peter Higginbotham creates a vivid portrait of what really went on behind the doors of the workhouse ? all the sights, sounds and smells of the place, and the effect it had on those whose lives it touched. Was the workhouse the cruel and inhospitable place as which it’s often presented, or was there more to it than that? This book lets those who knew the place provide the answer.

Peter Higginbotham is a freelance writer and historian. His fascination with the subject of workhouses began after discovering an ancestor had died in the Birmingham workhouse. His interests encompass other historical institutions such as prisons, asylums, hospitals children’s homes and housing for the poor. He is the author of several books and also regularly contributes to magazines and TV and radio programmes, including Radio 4’s Making History and BBC1’s Heir Hunters. He lives in Ilkley, West Yorkshire.

Introductory Guide to the Records of the Palatinate of Lancaster

The Lands of Lancaster

Views From The Parish