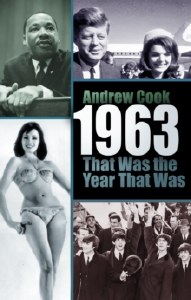 A compendium of milestone stories and watershed events in popular culture, national and international politics from 1963, including: The Beatles' first No 1 The coldest winter since 1740 Martin Luther King's 'I Have a Dream' speech The Great Train Robbery The Profumo Affair Ian Brady and Myra Hindley's killings The first woman in Space, Valentina Tereshkova James Bond becomes an international phenomenon 70,000 protest against nuclear weapons in London Harold Wilson's election, and the onset of 'new politics' and satire The assassination of JFK The BBC launch of Doctor Who