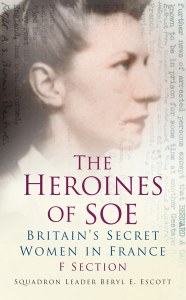 The Heroines of SOE: Britain's Secret Women in France.

Britain's war in the shadows of male spies and subterfuge in the heart of occupied France is a story well known, but what of the women who also risked their lives for Britain and the liberation of France? In 1942 a desperate need for new recruits, saw SOE turn to a previously overlooked group - women. These extraordinary women came from different backgrounds, but were joined in their idealistic love of France and a desire to play a part in its liberation.

They formed SOE's F Section. From the famous White Mouse, Nancy Wake, to the courageous, Noor Inayat Khan, they all risked their lives for King, Country and the Resistance. Many of them died bravely and painfully, and often those who survived, like Eileen Nearne, never told their stories, yet their secret missions of intelligence-gathering and sabotage undoubtedly helped the Resistance to drive out their occupiers and free France.

Here, for the first time is the extraordinary account of all forty SOE F women agents. It is a story that deserves to be read by everyone.