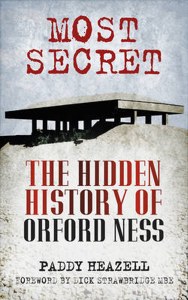 Orford Ness was, for most of the twentieth century, a military research station so secret that nobody knew what went on there, and so remote that even now most people have never heard of it. Yet the contribution of its scientists, service and civilian, to the winning of the First World War, the Second World War and the Cold War places them on a par with the codebreakers of Bletchley Park. At this highly atmospheric and often inhospitable location on the Suffolk coast, the Royal Flying Corps (later RAF) conducted crucial experiments and trials, some brilliant, others futile, on effective gunnery, accurate bombing and improved navigational aids.

It was the venue for Watson Watt's early work on radar and for Barnes Wallis' improved Tallboy bomb. From 1953, the Atomic Weapons Research Establishment used it as the testing range for British nuclear bombs. In 1967 the world's most powerful radar station, COBRA MIST, was constructed for the US Department of Defense.

Why it was closed down is just one of many Orford Ness mysteries. Owned by the National Trust since 1993, Orford Ness is a National Nature Reserve of international significance. But its military history has proved no less important and its secrets highly intriguing.

This book tells an incredible tale of ingenious, talented and brave men - and women - who operated with typically British patience and resourcefulness in often highly uncomfortable and, on occasions, fatal circumstances.