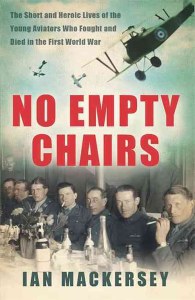 The empty chairs belonged, all too briefly, to the doomed young First World War airmen who failed to return from the terrifying daily aerial combats above the trenches of the Western Front. The edict of their commander-in-chief was the missing aviators were to be immediately replaced. Before the new faces could arrive, the departed men's vacant seats at the squadron dinner table were sometimes poignantly occupied by their caps and boots, placed there in a sad ritual by their surviving colleagues as they drank to their memory.

Life for most of the pilots of the Royal Flying Corps was appallingly short. If they graduated alive and unmaimed from the flying training that killed more than half of them before they reached the front line, only a few would for very long survive the daily battles they fought over the ravaged moonscape of no-man's-land. Their average life expectancy at the height of the war was measured only in weeks.

Parachutes that began to save their German enemies were denied them. Fear of incarceration, and the daily spectacle of watching close colleagues die in burning aircraft, took a devastating toll on the nerves of the world's first fighter pilots. Many became mentally ill.

As they waited for death, or with luck the survivable wound that would send them back to 'Blighty', they poured their emotions into their diaries and streams of letters to their loved ones at home. Drawing on these remarkable testimonies and pilots' memoirs, Ian Mackersey has brilliantly reconstructed the First Great Air War through the lives of its participants. As they waited to die, the men shared their loneliness, their fears, triumphs - and squadron gossip - with the families who lived in daily dread of the knock on the door that would bring the War Office telegram in its fateful green envelope.