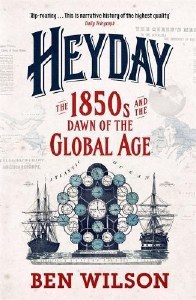 Heyday: The 1850s and the Dawn of the Global Age

The 1850s was a decade of breathtaking transformation, with striking parallels for our own times. The world was reshaped by technology, trade, mass migration and war.

Historian Ben Wilson recreates this time of explosive energy and dizzying change, a rollercoaster ride of booms and bust, focusing on the lives of the men and women reshaping its frontiers. At the centre stands Great Britain. Heyday reclaims an often overlooked period that was fundamental not only in in the making of Britain but of the modern world.