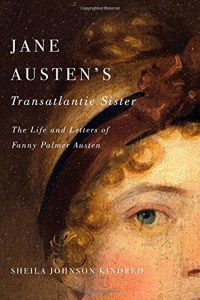 In 1807, genteel, Bermuda-born Fanny Palmer (1789-1814) married Jane Austen's youngest brother, Captain Charles Austen, and was thrust into a demanding life within the world of the British navy. Experiencing adventure and adversity in wartime conditions both at sea and onshore, the spirited and resilient Fanny travelled between and lived in Bermuda, Halifax, Nova Scotia, and England. After crossing the Atlantic in 1811, she ingeniously made a home for Charles and their daughters aboard a working naval vessel, and developed a supportive friendship with his sister, Jane.

In Jane Austen's Transatlantic Sister, Fanny's articulate and informative letters - transcribed in full for the first time and situated in their meticulously researched historical context - disclose her quest for personal identity and autonomy, her maturation as a wife and mother, and the domestic, cultural, and social milieu she inhabited. Sheila Johnson Kindred also investigates how Fanny was a source of naval knowledge for Jane, and how much she was an inspiration for Austen's literary invention, especially for the female naval characters in Persuasion. Although she died young, Fanny's story is a compelling record of female naval life that contributes significantly to our limited knowledge of women's roles in the Napoleonic Wars.

Enhanced by rarely seen illustrations, Fanny's life story is a rich new source for Jane Austen scholars and fans of her fiction as well as for those interested in biography, women's letters, and history of the family.