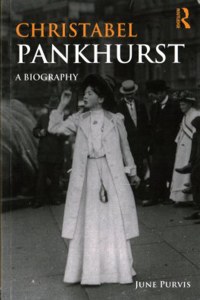 Together with her mother, Emmeline, Christabel Pankhurst co-led the single-sex Women's Social and Political Union (WSPU), founded in 1903 and soon regarded as the most notorious of the groupings campaigning for the parliamentary vote for women. A First Class Honours Graduate in Law, the determined and charismatic Christabel, a captivating orator, revitalised the women's suffrage campaign by rousing thousands of women to become suffragettes, as WSPU members were called, and to demand rather than ask politely for their democratic citizenship rights. A supreme tactician, her advocacy of `militant', unladylike tactics shocked many people, and the political establishment.

When an end to militancy was called on the outbreak of war in 1914, she encouraged women to engage in war work as a way to win their enfranchisement. Four years later, when enfranchisement was granted to certain categories of women aged thirty and over, she stood unsuccessfully for election to parliament, as a member of the Women's Party. In 1940 she moved to the USA with her adopted daughter, and had a successful career there as a Second Adventist preacher and writer.

However, she is mainly remembered for being the driving force behind the militant wing of the women's suffrage movement. This full-length biography, the first for forty years, draws upon feminist approaches to biography writing to place her within a network of supportive female friendships. It is based upon an unrivalled range of previously untapped primary sources.