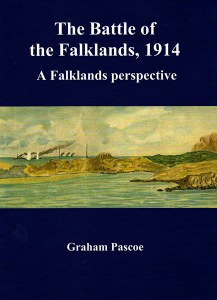 The Battle of the Falklands, 1914 : A Falklands Perspective

This monograph is adapted from two forthcoming works, The Falklands saga and A Brief History of the Falkland Islands both by Graham Pascoe. It examines the battle from a Falklands perspective as described (and prdicted) in several issues of the Falkland Islands Magazine published in Stanley in 1914 and 1915 and as described in a range of British and German sources some never published before.

It begins with the outbreak of war and von Spec's voyage from China across the Pacific with his five warships Scharnhorst, Gneisenau, Nurnberg, Leipzig and Dresden, as they tried to return to Germany. At the Battle of Coronel off the Chilean coast on 1 November 1914 they sank the British armoured cruisers Good Hope and Monmouth with all hands: five weeks later von Spec mounted a hit-and-run raid on the Falklands but a British squadron under Vice-Admiral Sir Doveton Sturdee had arrived there only hours before the German squadron. All the German warships were sunk (one of them later) and almost two thousand German seamen died. Only eight British seaman were killed.