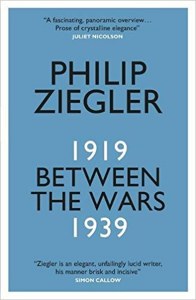 At the end of 1918 one prescient American historian began to write a history of the Great War. "What will you call it?" he was asked. "The First World War," was his bleak response.In Between the Wars Philip Ziegler examines the major international turning points - cultural and social as well as political and military - that led the world from one war to another.

His approach is panoramic, touching on all parts of the world where history was being made, examining Gandhi's March to the Sea and the Chaco War in South America alongside Hitler's rise to power.It is the tragic story of a world determined that the horrors of the First World War would never be repeated, yet committed to a path which in hindsight was inevitably destined to end in a second, even more devastating conflict.Each chapter bears the unmistakable stamp of Ziegler's scholarship: a keen eye for the telling anecdote, elegant and fluid prose, and calm and fair judgments. In a world that grows ever more uncertain, its perspective on how hopes of peace can dissolve into the promise of war becomes more relevant with each passing day.

Sepoys In The Trenches