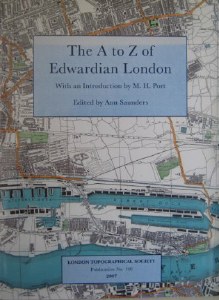 The A-Z of Edwardian London

The A to Z of Edwardian London :

The London Topographical Society's A to Z series consists of seven books, which provide fully-indexed maps of London at roughly 100 year intervals. Each reproduces a key map of the period. The indexes allow users to identify the position of streets and buildings, in some cases right down to small courts and alleys. They appeal to anyone interested in the development of London and are invaluable for those researching family history.

Between the 1888 and c 1912 editions of Bacon’s 'New Large-Scale Ordnance Atlas of London & Suburbs' Greater London grew more than 28% in population. The area loosely termed ‘London’ expanded similarly. Bacon's revised edition of the atlas was surveyed in the closing years of King Edward VII’s reign and then published in about 1912 requiring 34 sheets at 4 inches to the mile instead of 25. This wonderful publication is a reproduction of the later edition, printed almost at full size and retaining the colouring of Bacon's original, thus enabling the user to distinguish tram from omnibus routes and to pick out easily the topographical features. In addition to the main map of 34 sheets at a scale of 4" to the mile, there is a key sheet, a large-scale plan of Central London, 7 maps of the Home Counties (Berkshire, Buckingham, Essex, Hertford, Kent, Middlesex and Surrey), 13 special maps of London (Port of London, Postal Districts, Police Divisions and Steam Railways, Water Supply, Electric Supply, Gas Supply and Underground Railway System, County Courts and Omnibus and Tram Routes, Police Courts, Petty Sessions, Parliamentary Divisions, Parliamentary and Metropolitan Boroughs and finally the Unions) and an alphabetical index to Streets, Roads, Squares, Railway Stations, Public Buildings and London Clubs of over 20,000 names.

Greenwood's Atlas Of The Counties Of England & Wales 1829 CD ROM

The A-Z of Charles II's London

The A-Z of Elizabethan London