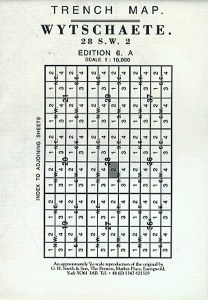 The second map of this area in the G H Smith collection from Basseije Vroilandhoek and Spy Farm (on the west) to Hollebeke Château (on the east) and from St Eloi to near Hun and Middle Farm on the road from St Eloi to Messines. The trenches are as they were on 18 July, 1917 and are shown on the right hand side of this 1:10,000 map. The main German lines are those known as Otira, Omelette and Orkney trenches. A considerable length of the Ypres-Comines canal is shown and several trench mortar positions are shown (for example in Green Wood). The British front line is given as ‘approximate’ and No Man’s Land is unusually wide (over three quarters of a mile in the area of Wambeke). A large number of ‘enemy’s tracks’ are depicted - particularly in the area behind Hollebeke. The ‘Military Road’ is shown in red and going right up to the British front line.

P&p for trench-map only orders sent to addresses in the UK costs £0.50p, £1.50 to Europe and £2.00 for Rest of World addresses. Our standard postage rates will apply for combined orders of books and trench maps.