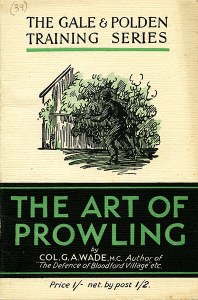 `It is extraordinary how reluctant the British soldier is to show cunning. We try to play the game of war as if it had rules for fair play like cricket and football.'`If you want to make your spell of duty pass quickly, concentrate on prowling properly.'`By Jove, look! There is a suspicious-looking man creeping under those bushes. It will be heaven help that rough chap if he makes a break!'First published in the 1940s for the newly-recruited British Home Guard, The Art of Prowling is one of a series of Second World War training booklets written by Colonel G.

A. Wade. It showed recruits how to sneak up on the enemy without being seen, how to avoid attracting attention, and why they should never underestimate a German spy.

Both amusing and nostalgic, it is a unique insight into British culture at the height of the struggle against Hitler and will, as the author says, `induce you to take pride in being really, truly, definitely cunning, crafty and sly'. Read it yourself - and be awarded the Good Prowler's Badge!