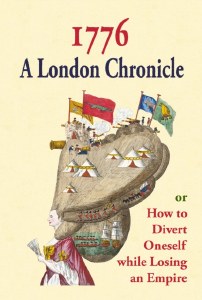 1776 : A London Chronicle, Or How to Divert Oneself While Losing an Empire

Much has been written about events in America at this time, but what was it like to be living in London? This book seeks to answer that question by way of a daily chronicle in which the year's stories emerge through diaries, letters, newspaper reports, and a wealth of previously unpublished material, from state papers to Edward Gibbon's pocket-book. Among notable events were the trial of the Duchess of Kingston for bigamy, David Garrick's farewell to the stage, Captain Cook's setting out on his final voyage, and publication of Adam Smith's The Wealth of Nations. These unfold alongside a host of forgotten stories, characters and incidents to create a revealing portrait of London in a momentous year.