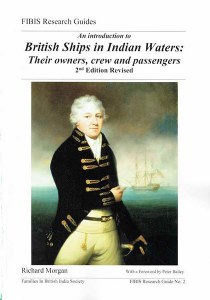 Richard Morgan’s FIBIS Research Guide No 2 is in a class of its own. Information on various aspects of Marine Transport in Indian Waters is very fragmentary and it is a tribute to Richard’s analytical powers and his assimilation of facts that a very worthwhile manual has been produced.

The 2nd edition of this very popular FIBIS Guide is more than half as big again as the 1st edition with more information about the East India Company’s ships after the end of the Company’s monopoly in 1831.

This 2nd Edition includes two New sections:
Activities of the Shipping Committee;
Marine Correspondence: Incoming letters and petitions;
Court of Directors
Committee ResolutionsOutgoing letters
Other matters including: Coverage of the Company’s Extra Ships, Use of Lascar Seamen and the Company’s concern for their welfare.

The Guide also throws a strange light on the way Country Ships could morph into ships of the Danish Company and back again. In addition, the British Library has renumbered some of their Records and the new edition reflects the Numbers now in use. All the new material is illustrated by examples from the different documents which gives an authentic feeling for the Men and the Ships.