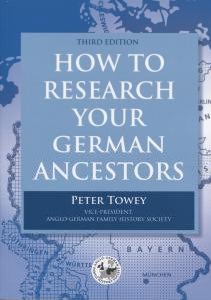 The Anglo-German Family History Society was formed in 1987 by a group of British family historians who had discovered that they had ancestors from the German-speaking parts of Europe. As there was little material available in English on how to research in Germany, Society members had to start from scratch when researching Germans who settled in UK.

How To Research your German Ancestors outlines how to undertake research into German ancestors in UK and in the different parts of German-speaking Europe.

It is based on over 25 years' practical experience in advising members and undertaking research and has also been fully revised from earlier editions to take account of what is now available on the internet.

The title of this slender volume sounds rather ambitious, as would a work of similar size seeking to provide guidance on, say, researching one's British ancestors. However the author, Peter Towey, is a well-respected authority on German family history research and is currently a vice-president of the Anglo-German Family History Society. He gives an excellent overview of the scale of the task facing family researchers with German ancestors and gives detailed listings, notes and guidance on potential research sources within the United Kingdom and mainland Europe, as we know it today. Research into German-speaking areas of Europe is naturally a challenging one, mainly due to all the changes in Europe that have occurred over the last three hundred years or so. National boundaries, identities and even the existence of a number of kingdoms and countries that once had separate identities have been merged with others. Despite all these challenges, this book is a most useful reference work for those seeking initial guidance into researching German-speaking ancestors. Alan Hart The Friends of The National Archives